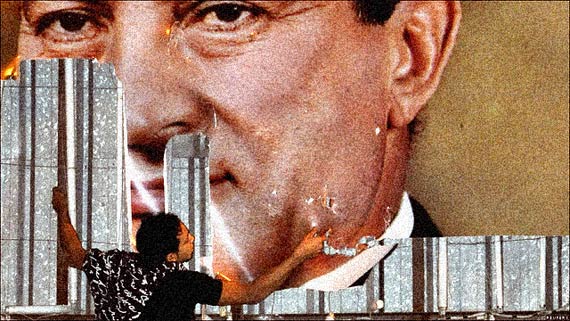 United Explanations interviews two young Egyptians who witnessed an historical shift in his country. They lived the first transition of Egypt towards democracy. They explain us, from below, how Egyptian people felt and lived during the revolution, what we could'nt see on TV.

The Egyptian revolution explained from below

As we read on United Explanations we might understand what happened in Egypt (and by extension the other Arabic revolutions people are witnessing nowadays). But… How did Egyptian people actually feel during the revolution? What are the things we didn’t see on TV?

Two Egyptians kindly answered some questions for United Explanations which will help us to understand better what happened in Egypt and what it will become in the near future.

Jasmin Ahmed. 25 years old. Lives in Cairo. Graduated from Pharmacy College. She works at a pharmaceutical company as a developing manager.

Have you ever been politically involved?

Jasmin Ahmed (J.A): No, I’ve never been politically involved before revolution because most of us -the young I mean-  were frustrated and disappointed of everything related to politics in Egypt, it was like a money sided dialogue between the Government and the Government .. There was a huge gap between the elites and the common people.

What triggered you to demonstrate against Mubarak? Did your family and friends demonstrate? Where they supportive of you?

J.A: You got to know that it began before 25th January.  5 months ago there was an accident involving the killing a young man in Alexandria by hands of the police. He was beaten up brutally and without evidence, this was the spark that ignited our rebellion against police at first and continued on websites with any other governmental provocation…There were minor demonstrations here and there, this is why when the spark of 25th January was declared on websites and made us all go out.

It started with the youth on 25th January and accelerated until The Friday Of Rage where everybody demonstrated, even children and hell was broken loose in the regime’s face.

M.H: I was reading the anti Mubarak articles and we started writing our opinions on our blogs but I never

demonstrated, not even once, which I really regret. The real reason for all this: This guy (Mubarak), to be honest, has done for us so many things at his first period of mandate.  He let us live in peace, not entering on war. However we have border problems with Israel but we didn’t enter. Thanks to him Egypt shifted from a period of almost war to a time when many foreigners started to come to make investments here. He made many projects but like everyone who has money and power for a long time, he naturally changed, so did his political allies. We became very poor, not well educated, illnesses increased, corruption became like a cancer in all places – to be honest this happened in most Institutions. Because the internet makes the world like a small city we, the people, realised that we could do it. So we started to gather people and invite through facebook after the event in Tunisia. My friends, girls and men, went out to demonstrate and they told me to come many times but I didn’t go.

How was life in Egypt during the revolution? Could you easily find food and daily supplies?

J.A: Life was not easy during those days until the day of Mubarak’s stepping down because people felt insecure during demonstrations. Many businessmen ran away from Egypt from fear of a civil war but this didn’t happen because luckily the army stepped in and joined the people… Now everything is back to normal gradually, people continue their lives and go to work. There was no shortage of food or gas or any other supplies during or after.

M.H: It was easy. Maybe we weren’t ready for that so most of us stayed at home taking care of their family and the others went at TAHRIER SQUARE. Food was easy to get. Maybe we had some problems with bread shortage but in general it was easy.

What was the atmosphere like? Was it full of rage or joyful because of the changes? Were you afraid? 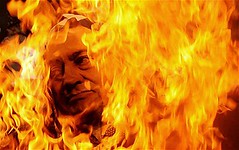 J.A: Most of us were happy and excited at the beginning, then afraid when the regime tried to frighten us by pulling away the police force and letting out some criminals but we managed to arrange ourselves in groups to guard streets and possessions and with the army’s help we managed to control all aspects of life in just a few days.

M.H: I had touching emotional things happening to me. At that time I went with a foreigner friend to stay with my family and every day at night I went down to stay with my neighbours to protect our area. At first I didn’t know them, after a while we became closer to one another. However we did not agree on some points but at the end we were protecting together, we laughed so much, and the old men stayed until morning. I understood our reality at that moment: In the morning some people went to the demonstrations and at night they protected their area and their loved ones.

J.A: The role of technology is not only in this revolution, it’s on everything, it’s about knowledge and the world becoming a tight place where you get to know everything. I think knowledge is the difference between taking an action or just thinking about it. In a short period of time young people here gained more confidence, respect and experience than in 5 years. I think we’ll take over the political life here, we are already arranging ourselves in parties and organizations to be ready for real political practice with time. We know that democracy is practise not something you are born with.

M.H: Our country’s main base is young people, and nowadays most of us have dreams and we make the dream come true. This is what happened. We dreamed to be free, many of us dreamed this and we met on facebook and twitter. We saw Egyptian people who had emigrated to other countries coming back to Egypt to accomplish this dream. This happened through facebook. In the past it was paper which helped the people making revolutions. In our revolution, the important media was technology.

Do you think Omar Suleiman is entitled to rule your country? Do the citizens trust him? What changes have you seen after the fall of Mubarak?

J.A: We don’t trust anybody that was appointed by Mubarak, although many of us think that Omar Suleiman is a fine

man. But the whole revolution was meant to change the whole regime not only Mubarak, and now the army runs the country until the upcoming presidential elections in few months.

M.H: Mr. Suleiman is a good guy. He helped in many international issues like the case between Palestine and Israel. When Palestines arrested an Israeli officer it was such a big problem at this time, he is the one who solved it, he is skilful in politics. Because he worked at Intelligence services, people refused him. They refused anyone who had before a position during the Mubarak era. In my opinion, sometimes people can’t act how they want to when there’s a limitation there, that’s why I think this guy is good but people, like I told you, they don’t want any symbol from the past.

After Mubarak is gone, I see many things done. First I see good people coming to take care of us: Mr. Zwale, Mr. Amr Mousa… For example, yesterday (22nd February) Mr. Mousa stopped Libyan people from the ARAB Nation, this is a courageous decision because there’s no limitation like before.

Do you think it is possible to set up free and transparent elections within 6 months? Do you think people are ready for that?

J.A: People are ready for democracy. We’ll go through it and we’ll mess up during the first few years but then as I said democracy is a practice and when you gain it that’s the trophy, no nation on earth was originally democratic.

M.H: I think it’s possible, we have many good people.

The Muslim Brotherhood wants to create a new political party, do you think they will win the elections? Or do you believe they might only get a small support? 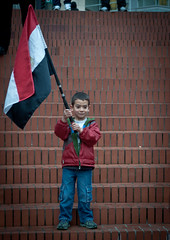 J.A: The Muslim Brotherhood is not a party yet and, by the way, they don’t have this publicity that you western people think they have. Many oppose them, me for example. I’m a Muslim but I won’t vote them for a very simple reason: they don’t have a convincing broad vision for the future and I want to tell you that Egyptians are very cultured. We are not moved by religious convictions only either we are Muslims or Christians… Of course they will obtain some votes as any other party but I think it won’t get a majority.

A word of truth: this Muslim group is a myth and our regimes spread it only to frighten the West so they wouldn’t support any riots or demonstrations against them, that’s all, and mark my words: you won’t see any Islamic government in Tunis or Egypt or even in Libya.

M.H: Look, to be honest, Muslim Brotherhood are well organized, they know what they want and they try to get it. They think well about their goal, but I don’t think that they will win if they continue on the same line I think, because people become open now, they can see an other idea and we have experience now about who is good and who is bad.

I smile to freedom, I smile to a new hope, I see a new vision. I believe in that. We are changing: even if there is no police on the streets, no one breaks any traffic light. No Christian people get injured or any churches burned.

Streets become clean because the people go and clean them, together man and women, old and young, boys and girls, Muslims and Christians.

I am so proud of being Egyptian and wish the same dream for all Arab countries.

Jasmin and Mahmoud finish the interview providing us a video released after the revoltion:

United Explanations specially thanks the collaboration of Jasmin and Mahmoud in their effort to help understand what happened in Egypt and most important, how people lived – and still lives – this historical moment. We also want to thank the job of Aina Poch and Loïc Gerbeaux for their contribution to make this interview happen.