If you don't have an Oyster card you will have a problem in London. Your single tube ticket will cost you up to 4.7 €! but once you get the card the price is as low as 1.8 € 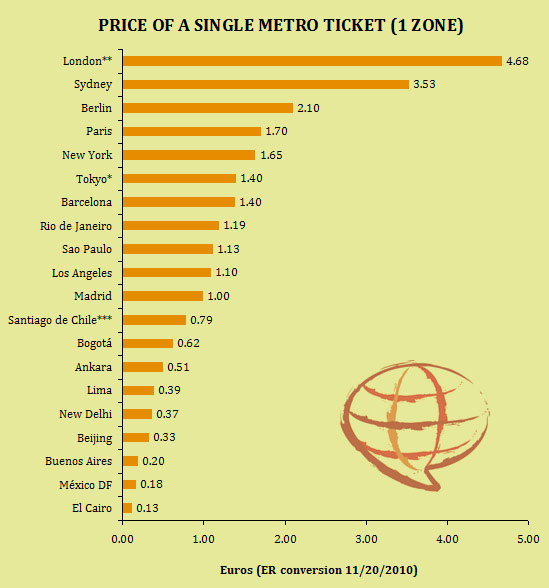 The price of a single metro ticket and the exchange rate

If you don’t have an Oyster card you will have a problem in London. Your single tube ticket will cost you up to 4.7 €! but once you get the card the price is as low as 1.8 €.

Looking at this graph one might think that a single ticket in Barcelona costs as much as one in Tokyo. It really does today for somebody from an euro currency country, like, for example, a guy from Barcelona. But this might change tomorrow. Why? Here the exchange rate (ER) comes in! Ticket prices have been converted from local currency to euros. So if the ER of the yen over euro varies, so it does the price of the metro ticket in Tokyo for a guy from Barcelona.

How much local currency can buy one €?

Exchange Rate: So, in January a single metro ticket in Barcelona costed 1.4€ but a single metro ticket in Tokyo costed 1.23€ (instead of 1.4€ today, a difference of 13.8%). Does that mean that Tokyo Metro Co.,Ltd  changed the price of the ticket? No, it doesn’t. The price in Tokyo was still 160 yen in January. What changed was the ER over the euro. In January 1€ could buy up to 130.339 yen but in August the same euro could buy just 110.112 yen. So the price of the ticket, in euros, was cheaper in January than in August.

But, which factors intervene when settling the price of a single metro ticket?

The case of Buenos Aires

The price of a single metro ticket in Buenos Aires is really cheap compared to other cities, even to Latin American cities like Rio de Janeiro, Bogotá or Santiago de Chile. This is because the argentinian peso (the local currency) has experienced undervaluation over euro, more than what experienced chilean peso and brazilian real. Since June 2010 the argentinian peso has lost 14.2% of its value over euro, for 2.6% for the chilean peso and  5.9% for the brazilian real. So this means that for an european now it is cheaper to buy a metro ticket in Buenos Aires than a few months ago.

But there is also another explanation. The metro ticket in Buenos Aires is partly subsidized by the National Government. From January to September 2009 public subsidies invested to keep the metro ticket low ascended up to 354.5 million pesos (today that would be 64.1 million euros). That’s is something usual in many cities around the world, but in Buenos Aires the magnitude of the subsidy is higher than in other places. Over 71% of the January-September 2009 total service costs, carried out by Metrovías Sociedad Anónima (which is also in charge of the Premetro and Línea Ferroviaria Urquiza services), were covered by the National Government. By contrast, the Barcelona Metropolitan Transports, the public transportation company in Barcelona, covered just 47% of its total costs from the government.