In the past 10 days crude oil prices have jumped on average 10% around the world, with West Texas Intermediate up 14% to $98 and Brent up 10% to $112. Libya's unrest is behind this pattern. The trouble could worsen in key oil producing countries such as Saudi Arabia or Oman. Let's see what different media say about it. 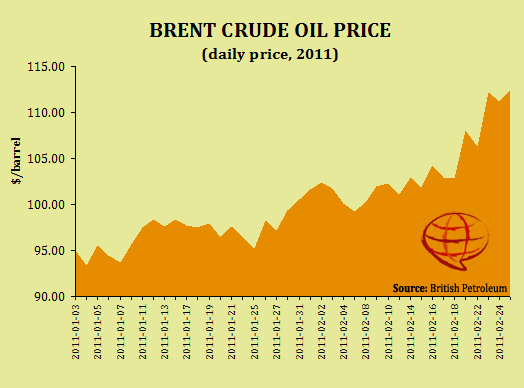 Everything is connected, especially if we think about oil. If the 18th world oil producer is having an unrest something is going to happen. And the rest of the world is going to suffer it. In the past 10 days crude oil prices have jumped on average 10% around the world, with West Texas Intermediate up 14% to $98 and Brent up 10% to $112.

Here we reproduce some recent interesting highlights from media regarding the oil price rise:

Financial Times: “With oil consumption accounting for about 5 per cent of the world’s gross domestic product and prices recently up 20 per cent, Gavyn Davies of Fulcrum Asset Management estimated that the recent price rises would increase total expenditure on oil by roughly 1 per cent, with offsetting reductions in demand for other goods and services.”

New York Times: “The primary market impact of the violence in Libya, a member of the Organization of the Petroleum Exporting Countries, has been on oil prices as investors fretted over Libya’s supplies and whether the violence in the Arab world will spread, in particular to Saudi Arabia. Rising tensions in Saudi Arabia’s oil-rich neighbor Oman are keeping those concerns alive.”

Reuters: “The uprising in Libya has cut Libya’s 1.6 million barrels per day by half, the International Energy Agency said on Monday, but Saudi Arabia’s pledge to pump more helped to prevent a further surge in the price of oil.”

BBC: “The European Union’s Energy Commissioner Guenther Oettinger said that most of Libya’s oil fields were no longer under the control of Libyan leader Colonel Muammar Gaddafi. ‘There is reason to believe most of the oil and gas fields are no longer under Gaddafi’s control,’ Mr Oettinger told a news conference. ‘Instead we have provisional [regional] leaders who have taken control,’ he said, adding there was therefore no point in blockading Libyan energy shipments.”

Economist: “Oil markets don’t like surprises. The sudden ousting of Mr Mubarak and the unrest in Libya, Bahrain, Yemen, Iran and Algeria (which between them supply a tenth of the world’s oil) had added 20% to oil prices by the middle of this week. The big worry is that spreading unrest will culminate in another shock akin to the oil embargo of 1973, the Iranian revolution or Iraq’s invasion of Kuwait.”

And Financial Times adds: “because oil-producing countries tend to spend less of their incomes than oil-consuming nations, the price rise is almost certain to lead to a drop in global demand.”

Spain has been the first country to announce a measure to prevent the dangerous effect of oil’s price rise on inflation: to cut its motorway speed limit to 110km/h from 120km/h. The action is intended to save petrol following the rise in crude oil prices and fears of a supply crisis caused by upheavals in Libya and other Arab states. Similar measures were taken during the 1970s oil crisis. The US reduced the speed limit on freeways to 55mph (88.5km/h) and Britain imposed a maximum of 50mph for a few months at the end of 1973. 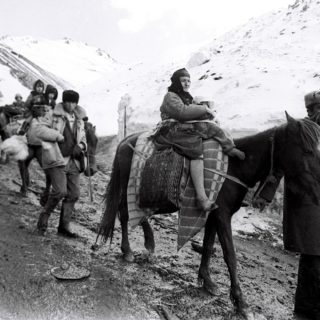