Last December 2010 elections took place in what's been called the Europe's last dictatorship: Belarus. As expected Alexander Lukashenka won with an official turnout of 80% of the votes. Though swift and rigged might to some degree reflect actual popular support he has from the society. 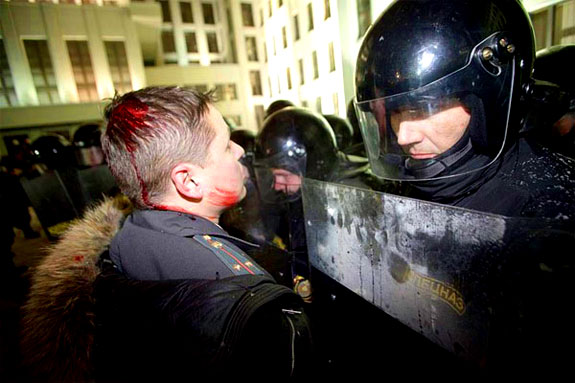 Belarus is the last country in Europe recognized by the western world as a dictatorship though formally it is a democratic republic with an election system run for the past 16 years by Alexander Lukashenka. Recently, in mid December, elections took place. It gives a good opportunity to analyze the situation, the system, society and international reactions.

However, it is not at all easy to analyze what is going on there without first having a look at the background of the country, and its society. It is impossible to equate what we see as freedoms, and rights with the perceptions of society that is so different and has such a different background. In fact, Lukashenka’s victory in this election, though swift and rigged might to some degree reflect actual popular support he has from the society.

To understand that, we need to realize that prior to Alexander Lukashenka coming to power in Belarus, the country had no history of modern statehood, much less a democracy. In fact it was a part of the Soviet Union, at the rank of Soviet Republic, a state within the federation. As Soviet Union was created in place of previous Empire of the Tsars, no democratic culture had a chance to develop and the powerful leaders in the government have usually been revered as the keepers of peace, security and stability. It can seem anachronistic to us today, but in time this system has created the image of the government as the good caretaker, which does not require, nor ask for interference from the society. The important thing is that from socio-political point of view, throughout the Soviet Union (except the Baltic States which had modern and more or less democratic statehood prior to World War II), its dissolution meant chaos, anarchy, rise of robber barons, crime and uncertainty about the future. In this period in many countries, most notably in Russia and Ukraine, national and newly privatized companies fell into financial trouble and were unable to even pay wages and the states found itself unable to provide basic welfare for their citizens.

In such climate, the Republic of Belarus declared its independence in 1990 and it was granted in 1991. Similar to other post-Soviet republics, the statehood formation process started with the nation’s constitution being drafted and internal power struggle among local leaders of the new sovereign state. In the 1994 free elections, Alexander Lukashenka came to power and reinstated Soviet style rule with less freedoms, but more stability, just what the people were used to: “back to the good old days”. It is important in the review of elections and results to notice that the President in this case has a more parental role. Of course, there are groups of people asking for a reform, end to dictatorship, however, as similar groups’ efforts caused turmoil in other CIS countries, such as Russia, Ukraine, Georgia and others the society in its majority opts for the stable parent.

Although not free to do whatever they want, they get paid on time, public healthcare works, crime is low compared to the more liberal states. I am not advocating dictatorship, but those points have to be made to realize that the dictator does have a base for popular support and does not necessarily need to rig elections. It matters not who Lukashenka is, how brutal against opposition, and how he centralizes power in Minsk. What matters is the society’s perception of his rule, and it is not at all as bad as we might perceive it ourselves. 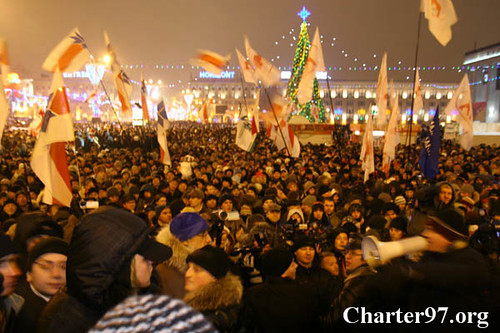 Naturally, having practically absolute power, the incumbent has dominated the election process. Nowhere, perhaps not even in Russia, is there so much bias during presidential or parliamentarian election campaigns. Nevertheless the so called democratic, or rather to be called capitalist, opposition having support in Europe, specifically through opposition radio station in Poland, counted on a victory, and a kind of peaceful revolution similar to the Orange Revolution in Ukraine. It is worth to notice that after the period of the Revolution, the Ukrainian society turned back to the pro-Russian candidate who holds the power today.

The elections took place over a five day period in mid December. According to reports, the workplaces in the country have made the voting mandatory, and the electoral officials were likely to change rig the result to Lukashenka’s favor. There is no question that he would have most supporters; however Polish officials conclude that it is likely that he could have gotten a bit less than 50% of actual votes, which would force a run-off round. It was therefore not enough for Lukashenka to win the election, but to show that he has won with a significant margin. During the elections, the authorities have arrested or otherwise detained prominent representatives of the opposition. Irregularities were also reported by OSCE before and during the pole. In effect, opposition sympathizers (Belarusian society is not homogenous) have gone to the streets in protest.

The emerging victor in those elections was of course the incumbent president, with projected 80% of the vote with the nearest candidate projected Andrej Sannikau estimated at 2.5%. Although Lukashenka would probably have won the elections anyway, the result shows that the country is stable and secure, and that there is no fear of the country plunging into any form of anarchy. This is probably the message Lukashenka tried to convey to the people, and consolidate his own power in the country especially with recent degradation of relations with Russia.

According to TNS Ukraine, Lukashenka got 42% of votes, followed by opposition candidate Vladimir Neklyaev with 17%, followed by Andrey Sannikov with 13% of votes. 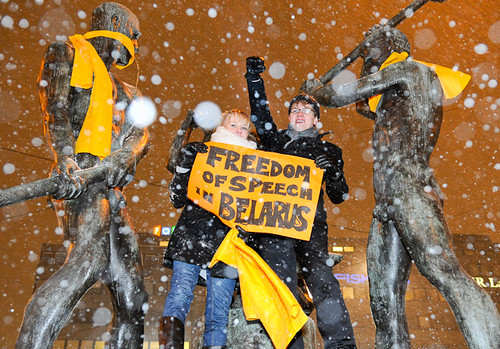 Internally the elections and its results sparked a demonstration of several thousand citizens in Minsk, the capital of the republic, with hundreds wounded and about 600 detained. This way of dealing with opposition is to be expected in a country with virtual no civil society, caretaker government, that uses whatever means possible to consolidate power. In the end major part of the society views opposition protesters as attempting a subversion of the government and perhaps a coup, leading to a power struggle, a vision that many families are not eager to face. Hence the policies, arrests, brutal dealing with protests and vote rigging internally can be viewed as an actually proper thing to do to save the country the chaos previously experienced by the neighbors. It is very easy for us in the western world to dismiss Lukashenka as a dictator and condemn him, but by doing so, we would need to condemn a whole nation for the way they let the paternal figure to govern them. Our perception of lack of freedoms and political oppression is unique to civic society. Belarus must and will slowly develop it, and then change will come as it came in other Eastern Bloc countries that are now a part of EU.

This is a nonprofit explanation-opinion

previousHow much does it cost a cinema ticket in...?