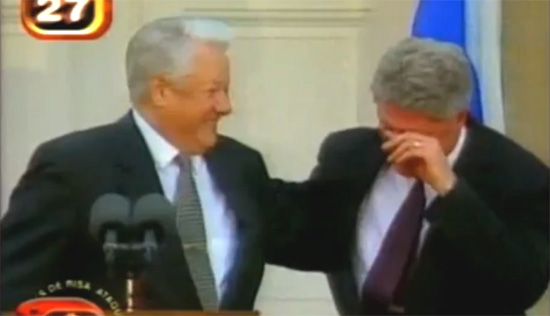 Remember, in 1995, when Clinton couldn't stop laughing at Yelstin's comment to a reporter? Let's relive it again.

Without any doubt a memorable situation that happened in 1995 at in New York. Presidents Bill Clinton and Boris Yeltsin had a summit conference prior to an appearance at the United Nations. Both leaders were trying to work out a deal on Bosnia, but they had strong disagreement.

According to close sources, that day Yeltsin had polished off most of a bottle of wine at lunch and insisted on an after-lunch drink. And he didn’t want any dessert, he wanted cognac. Later on when they appeared before the press corps, Yeltsin went on the attack to a media that he said had predicted his summit with Clinton would turn into a disaster over Bosnia.

“Now, for the first time, I can tell you that you’re a disaster,” he said, pointing directly into the camera.

There was a brief pause, and then Clinton started laughing. “Just make sure you get the attribution right,” he said, referring to the press. And he kept on laughing, and Yeltsin finally joined in, too. Clinton’s laugh was so loud and long that some people said it did not appear convincing. But it does really seem, doesn’t it?

Former Russian President Boris Yeltsin, who played a key role in the demise of the Soviet Union, died aged 76 on 23 April 2007.

This is a non-profit international funny fact