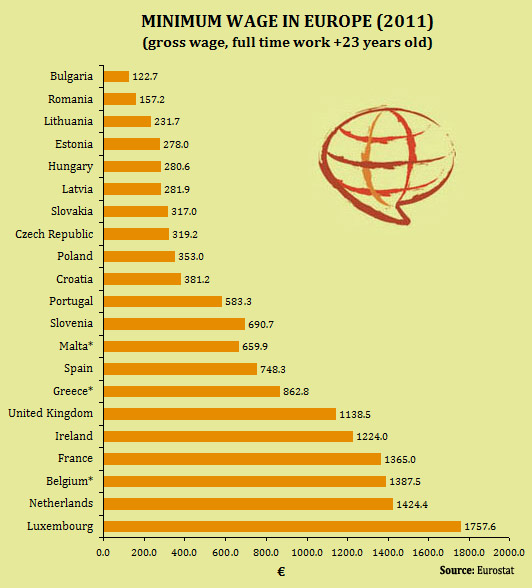 Check most updated information in here: Minimum wages in Europe (2012)

The minimum wage in Luxembourg is 14.3 times higher than Bulgaria’s

Although the GDP per capita in Luxembourg is “only” 6.4 times higher than Bulgaria’s its minimum wage doubles that proportion. As you can see on the chart there are 6 countries which surpass 1 thousand euros in their minimum wage. In fact, they are not the only ones, since there are some european countries that are not included (Germany, Denmark, Norway, Finland, etc.). On the other side, there are 10 countries where the minimum wage is below 500 euros.

The minimum wage is usually established by law but in certain countries collective agreements are being used as a mechanism to regulate the minimum amount of money that a worker must receive in exchange for his/her work. The amount of the minimum wage it is not updated every year, and does not alway rise. In fact, as a consequence of the crisis the minimum wage of Ireland has decreased by 12% this 2011. It will decline in Greece too. But in Slovenia, for example, the minimum wage has increased by 22.9%, a sharp increase that has been very controversial since the unemployment rate is above 10%.

When updating the minimum wage governments and collective agreements must take into account inflation and the overall economic situation. But the decision carries a strong political burden. Romania and Latvia both increased their minimum wage in 2011 by 11% although inflation was 6% in Romania and -1.2% in Latvia.

Minimum wage is the lowest amount a worker can be legally paid for his work. Eighteen European countries have some kind of statutory national minimum wage (in a similar way to non-European countries, such as Canada, Japan and the USA). This group is made up of nine of the ‘old’ EU 15 Member States (Luxembourg and Portugal also have statutory national minimum wages) and all of the 10 new Member States, apart from Cyprus which has a statutory minimum wage for a few specific occupations only. Whereas France, Greece, Portugal, Spain and the Benelux countries have a long tradition of protecting pay at the bottom of the labour market in this way, Ireland and the UK introduced national minimum wage systems only in the late 1990s. In Austria, Denmark, Finland, Germany, Italy and Sweden – the remaining six ‘old’ EU Member States – as well as in Norway and Cyprus, collective agreements are the main mechanism used for regulating low pay.