A few days ago the World Economic Forum released its latest Global Competitiveness Report 2010-2011 which ranks a total of 139 countries according to its degree of competetitiveness. Here we show the main results. 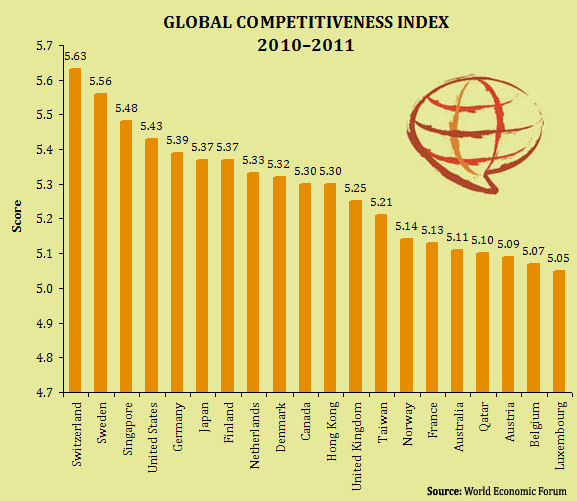 And the winner is…: Switzerland (again)

Switzerland remains first: Switzerland retains its 1st place position, characterized by an excellent capacity for innovation and a very sophisticated business culture, ranked 4th for its business sophistication and 2nd for its innovation capacity. Switzerland’s scientific research institutions are among the world’s best, and the strong collaboration between the academic and business sectors, combined with high company spending on R&D, ensures that much of this research is translated into marketable products and processes, reinforced by strong intellectual property protection and government support of innovation through its procurement processes.

United States in decline: the United States continues the decline that began last year, falling two more places to 4th position. While many structural features that make its economy extremely productive, a number of escalating weaknesses have lowered the US ranking over the past two years. The evaluation of institutions has continued to decline, falling from 34th to 40th this year. The report states that the public does not demonstrate strong trust of politicians (54th), and the business community remains concerned about the government’s ability to maintain arms-length relationships with the private sector (55th) and considers that the government spends its resources relatively wastefully (68th).

End of Spain’s miracle: Spain has dropped nine ranks this yer to 42nd place. The decline is in large part attributable to an increasingly negative assessment of the labor and financial markets as well as the level of sophistication of the country’s businesses. On a more positive note, Spain’s competitiveness performance continues to be boosted by the large market (13th) available to its national companies, strong technological adoption (30th in the technological readiness pillar), first-class infrastructure (14th), and good higher education and training (31st).

Reinforced China: Up two positions to 27th place, China has reinforced its position within the top 30. It is the only BRIC country to improve in the rankings this year, thus increasing the gap with the other three. China’s performance remains stable in most areas measured with the Index compared with last year, with its main strengths its large and growing market size, macroeconomic stability, and relatively sophisticated and innovative businesses.

Stable Chile: Stable at 30th, Chile remains the most competitive country in Latin America and the Caribbean, with a very convincing performance resting notably on solid basic requirements (37th) and efficiency enhancers (35th). The country has been at the forefront of market liberalization and opening, resulting in very efficient goods and labor markets (28th and 44th, respectively), one of the most sophisticated financial markets (41st), and the largest pension industry in the region.

Argentina still in the bottom: Argentina is fairly stable at 87th, continuing to feature in the bottom part of the rankings. The picture is rather mixed: important strengths, such as its extensive market size (24th) and fairly good educational system at the primary and higher levels (ranked 60th and 55th for health and primary education and higher education and training, respectively), do not seem to compensate for the serious and enduring shortcomings undermining Argentina’s long-term growth potential.

Here comes Qatar: Qatar, ranked 17th, enters the top 20 this year and reaffirms its position as the most competitive country in the region. With a projected growth rate of 18.5 percent for 2010, the country is the fastest-growing economy in the world, as well as one of the wealthiest. Its strong competitiveness rests on solid foundations made up of a high-quality institutional framework, ranked 10th overall, a stable macroeconomic environment (8th), and an efficient goods market (12th). Low levels of corruption and undue influence on government decisions, high government efficiency, and excellent security are the cornerstones of the country’s solid institutional framework.

What does competitiveness stand for?

Developing economies: the major engine of the global economy

In the preface of the report Klaus Schwab, Executive Chairman of the World Economic Forum, stresses that: “developing economies have for the most part fared comparatively well during the crisis: countries such as Brazil, China, and India are expected to grow at rates of between 5.5 and 10 percent in 2010, with growth holding up well over the next few years. Indeed, the world increasingly looks to the developing world as the major engine of the global economy.”
On the other hand, advanced economies face continuing difficulties such as persisting unemployment, weak demand, and spiraling debt, while still struggling with reforms in the financial and labor markets, among other challenges. The International Monetary Fund (IMF) predicts growth of 6.25 percent for emerging markets, compared with 2.25 percent for advanced economies in 2010.

The 12 pillars of competitiveness

The best way for Rwanda to improve its competitiveness is not the same as the best way for Germany to do so. This is because Rwanda and Germany are in different stages of development: as countries move along the development path, wages tend to increase and, in order to sustain this higher income, labor productivity must improve.

The GCI assumes that, in the first stage, the economy is factor-driven and countries compete based on their factor endowments: primarily unskilled labor and natural resources. Here is when the first 4 pillars (grouped under the category Basic requirements) play a role within what is been called factor-driven economies.

According to the authors’ approach, as a country becomes more competitive, productivity will increase and wages will rise with advancing development. Countries will then move into the efficiency-driven stage of development, when they must begin to develop more efficient production processes and increase product quality because wages have risen and they cannot increase prices. At this point, competitiveness is increasingly driven by what’s been called efficiency enhancers.

Finally, as countries move into the innovation-driven stage, wages will have risen by so much that they are able to sustain those higher wages and the associated standard of living only if their businesses are able to compete with new and unique products. At this stage, companies must compete by producing new and different goods using the most sophisticated production processes and through innovation.

Where does the data come from?

The World Economic Forum draws its data from two sources: international organizations and national sources, and the Forum’s Executive Opinion Survey. The Survey is a one-of-a-kind tool for capturing timely and vital information that is not available on a global level. The data gathered, by sending the survey to a representative sample of business leaders in their respective countries, provide a source of insight and a qualitative portrait of each nation’s economic and business environment, as well as how it compares with the situation in other countries.

Every year, the set of questions is updated to reflect changes to the structure of the Forum indexes and meet the need for new data. Most questions in the Survey ask respondents to evaluate, on a scale of 1 to 7, one particular aspect of their operating environment. At one end of the scale, 1 represents the worst possible situation; at the other end of the scale, 7 represents the best.
Share
Tweet
Share
20 Shares 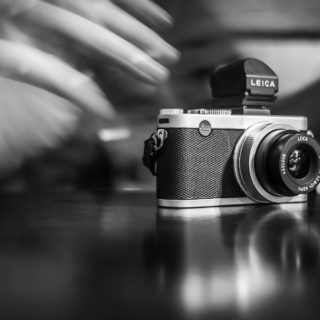 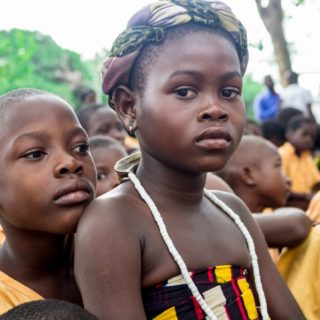 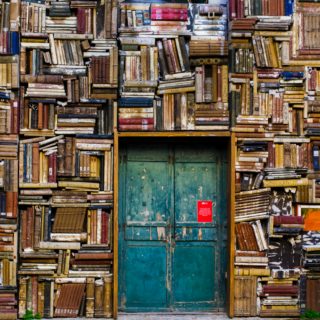